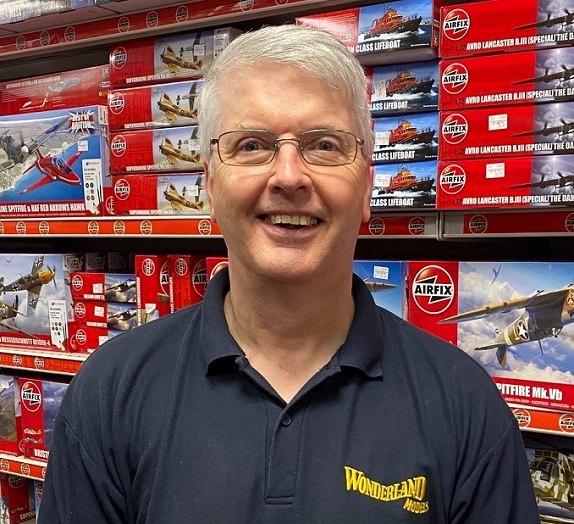 How long have you been with Wonderland Models?

In 1975 I got a job at Wonderland Models for the summer between school and University.  Somehow, I ended up working Saturdays and holidays for the next 7 years until my career took me away from Edinburgh.  Returning to Edinburgh many years later, I became a customer at Wonderland. In December 2009 I was asked if I could help them out for a month during the Christmas rush.  Over 12 years later, I am still here.

Aircraft, particularly UK Air Arms. If you have any questions about paint colours for aircraft, I'm your man.

Model making and photography.  Initially naval subjects, in fact, the bulk of my job application in 1975 was to build a wooden model kit of the Golden Hind.  This went into the shop window for a few weeks before one of the then owners decided he wanted it and took it home.

Working in the model railway department back in the 1970s sucked me into that area of model making but my real interest is in aircraft and aviation which developed in the 1980s when I lived in Cambridge.  At the time the area was home to many airbases such as Bentwaters, Lakenheath, Mildenhall, Coltishall, Marham and Wattisham and I went to dozens of Air Shows at these and other bases in the region and there are about 40,000 photographs to prove it.