An Introduction to Toys and Collectables 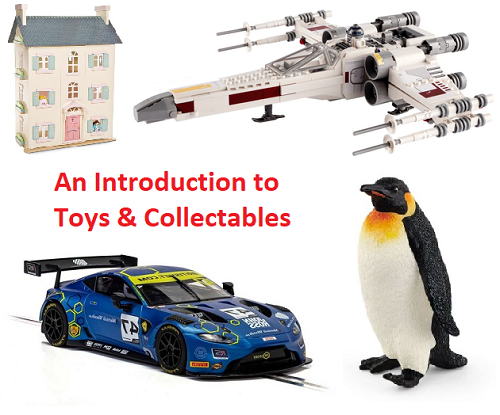 Our Toys and Collectables department includes a vast range of toys for children to play with indoors and out, craft and science sets that make perfect gifts, dolls houses, and construction toys, among many others.

Our outdoor toys and games department is where you will find our great selection of frisbees, kites, and model rockets.

Aerobie are the makers of the Pro Flying Ring, which holds the record for the longest thrown object at 1333 feet! Aerobie also produce a tough frisbee specifically designed for your dog to catch, the Dogobie Disc. We stock the fantastic range of great value kites from Brookite, ranging from the small Mini Flyer Diamond Kite all the way up to the agile Harrier Sport Kite, and they have a number of novelty kites such as the Fire Dragon Kite. Launch bottles into the air with the Rokit Water Rocket Kit, or start your career as a rocketeer with one of our fantastic Estes Rockets.

Our indoor toys and games department is where you will find our jigsaw puzzles, chess sets, dominoes, and other board games.

Check out the Gibsons range for high-quality classic games of chess, backgammon, and dominoes. They even have a 3-in-1 Game Set. In-store we keep a large range of Gibsons jigsaw puzzles. Be sure to check in regularly as they are always changing. We also stock the fantastic range of 3D Puzzles from Revell.

At Wonderland Models we stock the full range of highly detailed toy animals from Papo and Schleich. Choose from hundreds of animals including farm animals, wild animals, fantastical creatures from myth and fantasy, pets, and many more.

In addition to all of the toy animals we stock, you will also find may toy figures. Choose from knights and historical figures, fairytale princes and princesses, pirates, farmers and zookeepers, and more.

Every kid loves dinosaurs. We stock a wide range of high quality toy dinosaurs. From the small Tawa from Schleich all the way up to the Large Spinosaurus from Papo.

Get creative with our range of craft sets from House of Crafts and Great Gizmos. Try your hand at candlemaking, calligraphy or flower pressing. Make your own soap or let your inner artist out and paint a Russian doll. Too much choice to decide what to choose? Check out our Craft Compendium Set.

Every budding scientist and engineer needs to start somewhere. Our range of science and engineering toys from Great Gizmos are perfect for sparking their imagination. Build your own volcano, mine for crystals, build a robot, or become a detective. Check out the accurately represented engines from Franzis and Haynes.

The perfect hobby for every motor racing fan, build your track and challenge your friends to a thrilling, high-speed race. Get started with a Scalextric Sport Set. Turn your starter set into an epic race track by adding extra Scalextric Track. Add to your collection with new Scalextric Cars.

With famous brands like Lego and Meccano, and the newcomers to the scene Cobi, the fun you can have with construction toys are as limitless as your imagination.

Lego is one of the world's most popular toy brands. Their huge range of construction toys, made from simple Lego bricks, allows you to build anything your imagination can conjure up. From the Duplo range of large-brick sets for children 2 years and up, all the way up to the incredibly complex Lego Technic range, there is a Lego set for every age and every skill level. In addition to the Lego Classic Brick Sets and the ever popular Lego City range, there are sets from many other ranges. Lego also produce many licenced products incuding sets inspired by Star Wars, Harry Potter, and Super Mario. The Lego Minifigures range satisfies the collector's bug, featuring a random Lego figure in each pack.

Meccano have been producing construction toys for budding engineers for over 100 years and remain popular. Cobi construction toys are designed to be assembled in a similar way to Lego, allowing you to recreate real-life military and civillian vehicles.

Plunder the seven seas with our Barbarossa Pirate Ship, lay seige to a mighty fortress with the Lionheart Castle, or choose from one of our many wooden toy play sets. Be a 'Star Baker' with the Honeybake Oven & Hob Set, or set up your own shop with the Honeybake Cash Register. A toy garage is perfect for your toy car collection, and you can fill a farmyard with your collection of animals.

Get mechanical with the stunning wooden 3D puzzles, toys, and dioramas from Rokr and Rolife. We also stock the BigJigs wooden railway toys.