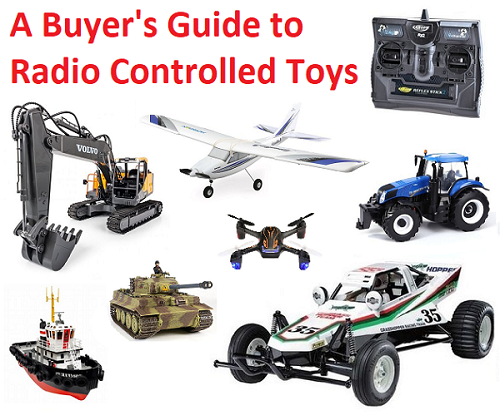 Radio controlled (RC) toys have developed from humble beginnings into a growing industry for children's toys and more serious hobbyists. With such a huge range of options available, knowing what to buy is the hardest part.  In this article we discuss the different RC toys out there to enable you to make the best choice for you.

Nikola Tesla famously demonstrated a radio controlled boat at an exhibition in 1898, where he made it seem that the boat was obeying the commands of the audience, while he actually controlled it with a radio transmitter. The first radio controlled device was showcased in London four years earlier, when a mirror galvanometer was moved by use of a radio device. Since then radio controlled devices have become commonplace, not just in radio controlled toys but in remote locking systems for your car, in both civilian and military unmanned vehicles, and many other applications.

Radio controlled toys come in a range of sizes and costs to suit any buyer. The range starts at small budget models and extends to highly detailed replicas of a wide range of vehicles. These include radio controlled cars, planes, quadcopters, boats and even tractors for the workers out there! Prices start at below £20 and can run into the thousands. So whether you are looking for a gift or treating yourself, go to Wonderland Models and consider buying a radio controlled toy. Its fun the whole family can enjoy, time and time again.

Ready to Run or Construction Kit?

Radio controlled models are available ready to run or as construction kits that you assemble yourself. Radio controlled toys aimed at children are ready to run straight from the box - just pop the batteries in and away you go. Larger and more advanced RC models often come as a kit requiring construction. Tamiya produce a range of pre-built versions of some of their RC kits, just requiring the radio equipment, which are ideal if you want something a bit more advanced but don't think you have the technical skill to build one of the kits.

If you are up to the challenge of building it yourself you will get a much better feel for how your RC model works, and will be able to choose what colour you want to paint it. RC models, particularly cars and buggies, often have a wide range of optional upgrade parts such as more powerful motors.

At Wonderland Models we also offer a radio controlled model building service. Get in touch for details.

What is the difference between Electric and Nitro RC?

Electric radio controlled models use an electric motor to provide motion, powered from a battery, while nitro radio controlled models use an engine powered by methanol-based fuel containing nitromethane. Traditionally electric RC vehicles were limited by the power of their electric motors and the batteries only lasted a short time before requiring recharging, while the engines in nitro RC models were more powerful. However, with the advancements in brushless electric motors and electronic speed controllers electric RC models rival nitro RC models for power and speed, and lithium batteries provide more power, longer life, and less weight than older batteries.

When the fuel tank on a nitro RC model runs dry you can just top it up and away you go, while the battery in an electric RC model will require recharging. However you can just have spare batteries that you can swap out and improvements in battery and charger technology mean that batteries can be recharged in a much shorter time than older battery types.

Due to the increase in performance of electric RC vehicles and the added complexity and mess of a nitro engine, electric RC has almost completely dominated the market. Safety is also a consideration. Nitro fuel is highly flammable but the flames are invisible to the eye.

Radio controlled cars and buggies are by far the most popular RC models. The Tamiya range of cars, trucks and tanks offer a huge variety of options starting with their range of X-SA pre-assembled cars that just need radio equipment added. If you would rather build your car then the range of kits on offer includes classics such as the Lunch Box and Grasshopper or more modern releases like the TT-02 Ford Escort Cosworth. If you like the idea of driving straight from the box then the HPI range consists of high quality ready to run cars with everything from the ION and Strada range of entry level cars up to Nitro powered monsters such as the 4.6 Savage X.

Once again Tamiya stand as the top brand when it comes to RC truck kits that you build yourself. These large 1/14 scale trucks are so accurate to real life that not only can you have working lights you can set them up to have all the sounds and vibrations that the real trucks would have. The range of trucks is supported by a range of different trailers. Tamiya also produce a range of prebuilt RC truck models in their Tamiya Factory Finished Trucks range. We also stock the Carson range of trailers that are compatible with Tamiya trucks.

The range of radio controlled tanks goes all the way from the small ready to run Invento RC Mini Tank all the way up to huge 1/16 scale RC tank construction kits from Tamiya.

With fully working tracks and suspension, RC tanks allow you to take on all but the roughest terrain. Controllable turrets make these the undisputed kings of the back garden battlefield. The range of RC tanks include classic legends of World War II such as the famous German Tiger heavy tank, through to modern main battle tanks like the US M1A2 Abrams.

There are also prebuilt RC tanks from Hobby Engine, Forces of Valor, and Trumpeter.

For fans of diggers, cranes, and other construction vehicles looking for a step up from diecast toys with something more realistic and interactive we have a range of ready to run radio controlled construction toys from HuiNa and Hobby Engine.

For anyone who loves toy tractors there are also radio controlled tractors. The most popular range of remote controlled tractors is from Siku, who produce many different tractors and trailers based on real-life vehicles from around the world. Britains, famous for their animals and diecast metal farm vehicles, also includes a radio controlled John Deere 6190R Tractor in their range. As does Maisto with their New Holland RC Tractor.

If you have limited or no experience of piloting models, then the Hubsan Q4 Quadcopter or Hobbyzone Duet RTF Plane should be the perfect starting point. Being easy to operate and having a long battery life they provide a solid platform to begin your training in the world of flight. Moving on from these basic trainers there are a host of larger radio controlled aircraft with more features such as more responsive controls allowing for more exciting aerial manoeuvres, GPS tracking, and high-definition cameras.

Hobbyzone produce a popular range of ready to fly RC planes that include the transmitter, receiver, battery, and charger in addition to the plane itself - everything you need to get up and flying in no time at all. These kits come part assembled and are easy and fun for beginners and experienced RC pilots alike. The Hobby Zone Duet Radio Controlled Plane is the perfect place to get started.

At Wonderland Models we stock the popular Hubsan and Syma brands of quadcopters. Most of our drones feature an inbuilt camera. From the tiny Hubsan Nano micro radio controlled quadcopter to play with at home or in the office, up to the professional-level Syma W1 Drone with multiple cameras up to 4k resolution and GPS.

If you have more of a nautical persuasion then the Volantex Racent Vector SR48 RC Race Boat is a great starting point.  It comes ready to run, meaning all you need to do is charge the batteries and away you go.

There are also radio controlled boat construction kits, such as those from Caldercraft. These models feature durable one-piece fibreglass or ABS plastic hulls, with wooden and plastic parts, plus metal fittings. Radio equipment is not included with these kits.

There are a number of key components of radio controlled models.

Transmitter: The radio transmitter is a handheld device that broadcasts radio signals based on your inputs, which are interpreted by the receiver in your radio controlled model. The transmitter will have a number of 'channels', each of which is used to control a different function.

Receiver: The radio receiver picks up on the signals broadcast by the transmitter and translates them into outputs to components in the RC model. In order to correctly receive the signals send from your receiver you will need to make sure that both are working on the same radio frequency. In older systems this is controlled by matching 'crystals' inserted into the transmitter and receiver, while modern transmitters and receivers are digital requiring them to simply be paired with each other.

Electronic Speed Controller: Interpreting signals from the receiver the electronic speed controller (ESC) regulates the speed and direction of the electric motor that drives the movement of an electric radio controlled model.

Servos: A servo provides geared rotational movement that controls precise motion of components of a radio controlled model, such as steering, gun elevation in a tank, crane movement in a construction vehicle, and numerous other applications.

Batteries & Chargers: All radio controlled models require batteries both for the transmitter and for the electrical components in the model itself. The motor in electric RC models is powered from a rechargeable battery. Check out our Buyer's Guide to RC Batteries to an in depth look at all the different battery types used in radio controlled models. Always use the correct charger for your batteries.