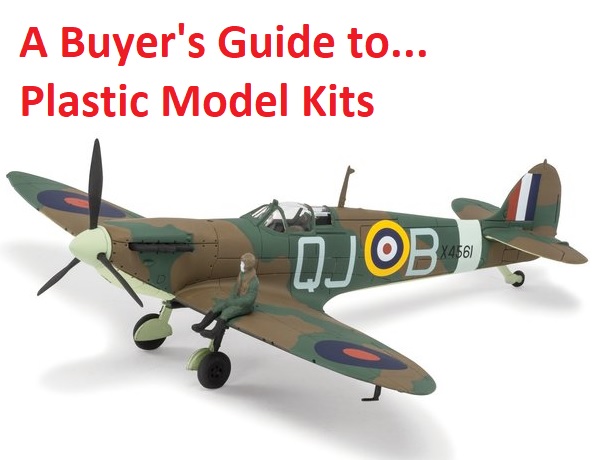 With being stuck at home during the pandemic lockdown so many people have taken up the hobby of building plastic model kits, and more have come back to the hobby after many years. Whether just starting out, getting back into the hobby, or looking for a gift, it can be a little  confusing. With this article I will describe what plastic model kits are, explain scales, talk a little about difficulty levels, give advice on what kits to choose to get started, and the essential tools and accessories that you will need.

What are plastic model kits?

A plastic model kit is a model made from dense polystyrene plastic that comes in parts that require assembly and painting, and usually include water-slide decals to apply.

The  parts come on a frame called a 'sprue'. Each part is numbered so that you which part to look for as you work through the step-by-step instructions. As they are needed, you will carefully remove each part with a pair of clippers, and tidy them up with a small craft knife and file, before sticking them into place with polystyrene cement. The instructions will also indicate what colour paints to use, and where to place the decals. Once fully assembled you will have an accurate scale model.

Airfix were amongst the very first brands of plastic model kit manufacturers and for a long time were the dominant manufacturer in the UK. Because of this all plastic models kits are often called 'Airfix' by people in the UK. The Airfix brand remains popular, competing with other brands producing quality model kits.

Build what interests you.

There is a vast array of modelling subjects available to choose from. Popular types of models include aeroplanes, tanks, ships, cars, motorcycles, and figures. There are also many model kits depicting subjects from popular movies and television series.

As well as the subject you want to build a model of you will also need to consider the size of the completed model, the level of difficulty, the time you have available, and your budget. Generally as the models get bigger they get more complex, and so the price also goes up, as does the time they will take to build.

What do skill levels mean?

Skills come with persistence and practice, if you are new to model building or just a bit rusty you may want to start on a smaller less complicated project. The smaller models are much easier and quicker to build than large and complex kits. Many experienced modellers will build these small kits between larger builds as something of a 'sanity project'.

Both Airfix and Revell indicate a skill level on their models, starting at level 1 and going up to level 5. Kits at level 1 and 2 are ideal for a first model, and you could go up to level 3 for a little more of a challenge. Level 1 models are the smallest and most simple model kits with only a few parts, and may feature pre-coloured parts and snap-fit construction that does not require glue. Level 2 models feature more parts but are still quick and easy to assemble. Most of the starter sets available will be level 2. From level 3 to 5 the level system becomes more of an indicator of the number of parts included in the model. A modeller with the experience to build a level 3 model would likely to have the skill level required for a level 5 model, but these would take much longer to build.

Most brands don't indicate a skill level on their kits but you can generally get an idea of how difficult a model will be by the size and price; easier models being smaller and cheaper.

What does the Scale mean?

How big is the model?

Put simply, the scale tells you how much smaller the model is compared to the real subject it is based on. For example a 1/72 scale aeroplane would be 72 times smaller than the real thing. Following that example, a real-life Supermarine Spitfire is 912 cm long, so dividing that by 72 will give you the length of a 1/72 model at 12.6 cm long.

So, as the number in the scale gets smaller the larger a model of a particular subject will become. A larger scale model of the Supermarine Spitfire would be 1/32 scale. If we divide the length of 912 cm by 32 you will see that the length of the model will be 28.5 cm.

There are many scales available. You will find that within each subject there will be two or three common scales, with others being more specialised. Each subject will have a smaller scale for mode simple models and a larger scale for more complex models, with many having a scale between the two for a nice balance between size and complexity. The most popular scales for plastic model kits are as follows:

Aircraft: For model aircraft the common scales are 1/32, 1/48, and 1/72. The smaller and simpler model aircraft will be 1/72 scale, and the larger more complex models being 1/32 scale, with 1/48 scale models sitting between the two. You will also find some aircraft models up to 1/24 scale and smaller ones at 1/144 scale. As airliners are very large in real-life, these are commonly modelled at 1/144 scale as they would be very large at the more common 1/72 scale.

Military Vehicles: Tanks and other military ground vehicles are commonly either 1/72 or 1/35 scale. If you want to build up a large collection of military vehicles or want to use them for tabletop wargaming then 1/72 is the scale for you, while 1/35 scale models will have much more detail and so is suited for when you want a single detailed model. There is also a limited range of 1/48 scale models in this subject. Some British manufacturers produce their small scale military vehicles, and figures, at 1/76 scale. This is because OO Gauge model railways are 1/76 scale.

Cars: The most common scale for model cars is 1/24 scale. These are large enough to have a good level of detail while not taking up lots of space. Larger car models come in 1/12 scale. Being double the size they can have much more detail. There are also some simpler car models at 1/32 scale, such as those in the starter sets from Airfix. This is the same scale as Scalextric cars. There are also Formula 1 car models at 1/20 scale.

Motorcycles: being smaller than cars, models for motorbikes are 1/12 scale for the smaller models, and 1/6 scale for the larger models.

Ships: There have been quite a number of different scales for ship models over the years as the standard kept changing. These days most manufacturers have settled on 1/350 scale for larger models and 1/700 for smaller models. There are also very small ship models at 1/1200 scale. These sound very different from the scales already mentioned for other types of models, but ships are usually much larger so need to be shrunk a lot more to make a model. Sailing ships are more often 1/96 or 1/72 scale as these are smaller than more modern battleships.

Figures: There are three common sizes for model figures. For collecting large armies and for tabletop wargames there are the 1/72 scale figures, which are about 20-25mm tall and come in boxes of up to 50 figures. 1/35 scale is common for sets of 4 or 5 nicely detailed figures that go alongside 1/35 scale military vehicles. Larger, individual figures come in 1/16 scale.

What is a model kit starter set?

Several brands of plastic model kit manufacturers produce a range of starter sets. Each of these starter sets include one of the smaller, simpler model kits that are ideal for a first model. In addition to the model itself these set include a small amount of glue, a brush, and the main paint colours required. If you are just starting out with modelling, or getting a model for someone who has never built one before, I would highly recommend getting a starter set.

There are also a number of gift sets available. These are similar to starter sets in that they include glue, brushes, and paint. What makes gift sets different is that they will contain more than one model, or will contain extras such as posters.

What tools and accessories do I need?

There are a few essential tools and accessories that I recommend you get when starting out. Many of these essential tools can be found in a tool set, such as the Model Craft Pro Plastic Modelling Tools Set.

Glue: The most essential accessory you will need is glue, usually called poly cement. For small parts I recommend one with a fine needle tip such as Humbrol Precision Poly or Revell Contacta Pro. For larger parts, where the glue would star to dry before you got all the way round, I recommend a thin liquid cement such as Tamiya Extra-Thin Cement or Mr Hobby Cement-S. With these you can put the parts in place first and brush the glue along where the parts meet; ideal for large aircraft fuselages and ship hulls.

Side Cutters: Commonly called 'clippers' these are used for removing the parts from the sprue. You could use a craft knife to do this but they put pressure on the parts, which will often break or bend the parts out of shape.

Craft Knife: When you remove a part from the sprue there will usually be a small area to tidy up, which is where the craft knife comes in. Be careful with your fingers and gently trim away and sprue left on the parts. Parts will often have mould lines along the side, where the two halves of the mould met. This can be removed by carefully dragging the side of the knife blade along the line. There are also specialist mould line remover tools available.

Abrasives: I would also advise getting some files or sanding sticks. There will be times where you need to be more subtle with tidying up parts, or need to work on a larger area. Abrasives make this much easier.

Tweezers: It is also good to have at least one good pair of tweezers. This will help when holding very small parts that can be difficult to hold with your fingers. You will also want tweezers to putting decals in hot water. There are specialist decal tweezers, which are smooth and flat, but you can get away with pointed tweezers. There are sets of tweezers available that include a few different point tweezers and a pair of decal tweezers.

Paint Brushes: There are many brushes available. I would recommend getting a set of flat brushes for flat surfaces and large areas, and round brushes for details.

Paint: You will also need to get paint for your model. The instructions included with your model will tell you what paint colours are recommended. There are different types of paints for models, each with their own pros and cons. We have a separate article all about model paints. I recommend choosing acrylic paints as they dry quickly and you can wash your brushes in water. Some model kit manufacturers such as Tamiya, Revell and Airfix produce their own range of paints. If you have a preferred range of model paints, or you have some model paints left over from a previous project, and the kit you have chosen indicates paint from a different range, there is a great model paint conversion website called ModelShade that you can use to match paint from one range to another.